About Everest Base Camp Trek - 12 days

Everest Base Camp Trek in Nepal is considered the father of all trekking routes and can be done by following different itineraries. Nowadays some trekkers prefer to walk up to base camp and return via helicopter as well. However, we have knitted the more traditional way of walking on this trail. It is the regular Lukla – Namche – Gorakshep – Everest Base Camp – Namche – Lukla route by walking.

The hiking journey starts once you have landed in the world’s most extreme airport the Tenzing Hillary Airstrip Lukla. Walk through the hamlets, green lush coniferous forests, and into the Sagarmatha National Park before achieving Namche Bazaar. The Khumbu marketplace can be reached once you have landed in Lukla after two days of spending a night at Phakding or Manjo. Acclimatization rest of one day is also done in Namche Bazaar.

Trekkers will hike around the hill up to Everest View Hotel or Khumjung/Khunde Village. The sight of mountains like Kwangde, Kusum Kangaru, Thamserku, Amadablam, Lhotse, Nuptse, Tabuche and Everest make your day. Adjustment in high altitude is for successful trekking. Therefore, it is mandatory to take a break for a day in Namche Bazaar.

Trekkers then take the route of spiritual monastery hill station hamlet of Tengboche and Pangboche to reach Dingboche. The village is the largest and least densely populated town/village in the Everest Base Camp Trek route. Another acclimatization is done in the village before heading to Lobuche via Thukla Pass.

Once you have crossed the Lobuche pass the terrain starts to become rugged. The trail is through moraine and glacier towards Gorakshep which is the last teahouse on the route. Everest Base Camp Trek finally gets to the final destination of the Everest Base Camp. Leave your footprints and gather as many memories as possible while you stroll around the base camp. Early morning hiking to Kalapathar (5545 m) offers a breathtaking Himalayan sunrise experience. Gear up for the enthralling return trip as well.

Book the Everest Base Camp Trek with Himalayan Ecological Trek and relish the walking journey to the base camp of Mount Everest. 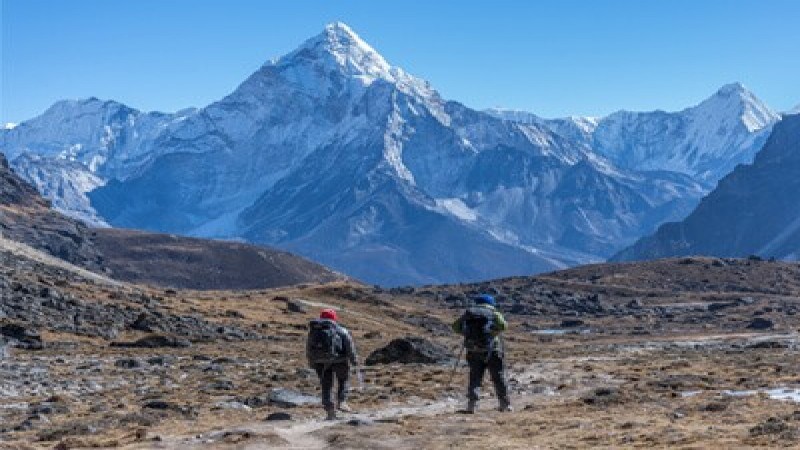 Day 1: Pick up from airport transfer to the Hotel

Our airport representative will receive you at the Nepal Airport in Kathmandu. You will be transferred to the hotel and all the trip details will be discussed. We will tick the pre-trekking checklist like documents, gears and permits etc. The team of Himalayan Ecological Trek will host the welcome dinner. Overnight at Hotel

We will do the sightseeing around the UNESCO WORLD HERITAGE SITES of Kathmandu. Tomorrow we need to wake up early. Therefore, the sightseeing tour will be limited to Swyambhunath, Bouddhanath, Pashupatinath and Kathmandu Durbar Square. These places are famous for Buddhism, Architecture, Hinduism and Nepalese craftsmanship. We will not do the tour of Bhaktapur and Lalitpur on this day. These two cities are also within the valley. In the evening you can relax and stroll around Thamel. Overnight at Hotel

Early in the morning, we will grab the packed breakfast and head to the domestic terminal for the flight to Lukla. We will enjoy the breathtaking scenery of mountains and hills along the flight. The landing at Lukla airport is very thrilling. Once we land in Lukla we will take a short coffee break. In the meantime, all the porters and Sherpa are gathered. We will then start to trek towards Phakding. The trail is easy and you can enjoy the scenery, a suspension bridge crossing as well as Mani Walls and a few hamlets along the way. Overnight in Teahouse

Today is a long day of walking. You will have to cross at least 5 suspension bridges over the Dudhkoshi River. We will also enter the Sagarmatha National Park today. After crossing the Hillary Twin Bridge we will have to walk uphill for about an hour. Finally, the first sight of Mt. Everest welcomes you. Once you reach the Namche Bazaar you can stroll around the marketplace. This is the major Sherpa town on the trail. You can find lots of eateries, bars, shops and banks in the market. The town is in horseshoe shape and offers the best view of Thamserku and Kwangde Ri. Overnight at Hotel

We will have to do an acclimatization exercise today. The major principle of the best acclimatization activity is to trek higher and rest lower. Therefore, we will visit the Everest View Hotel today. It is the world’s highest-situated hotel. You can get the breathtaking scenery of Mt. Everest, Lhotse, Nuptse, Cholatse, Taboche, Amadablam etc. It is indeed the perfect place to take a sip of coffee and enjoy the Himalayan beauty of Khumbu. We will then return back to our teahouse in Namche Bazaar. The evening is free for you to roam around the marketplace. Overnight at the Teahouse

Early in the morning, we will take breakfast. After brief stretching, we head towards Tengboche Village. Today we will have to walk uphill, Nepalese flat, downhill and again uphill. It is a mixed course. We will trek past Kyangjuma and Phungi Thanga to reach Tengboche. The place is famous for the monastery which holds the special festival the Mani Rimdu of Sherpa people every year. Find inner peace and serenity while you spend your time in Tengboche. The place is also located in a scenic place having the perfect view of Pangboche Valley and Mt. Everest with Mt. Amadablam on the backdrop. Overnight at Teahouse

We will trek downhill to Debuche and cross the Imja River to enter the Pangboche Valley. You will start to notice the change in the landscape and vegetation on this day. Beyond Pangboche the vegetation is scattered. We will have our lunch either in Pangboche or Somare before stopping in Dingboche. The Dingboche village is the last large settlement village on the EBC trail. So, you can give a stroll around the village in the evening. Overnight at Teahouse

It is the second acclimatization of our trip. We will hike Nagarshan Hill (5100 m). From the top of the hill, you can get a panoramic view of mountains like Amadablam, Cholatse, Tabuchi, Pumori, Island etc. After staying at the top for a brief period, we will trek downhill to our teahouse. Relax and rest in the warm dining area chitchatting with the fellow trekkers. The trekking from tomorrow is within the thin air area. Overnight in the Teahouse

Dingboche to Lobuche is not a difficult course to walk on. However, thin air starts to make your walking harder. We will stop at the Thukla for the lunch and continue our trek uphill to cross the Thukla Pass. At the top of the pass, we will pay our respect to the memorial. The memorial is of the brave climbers who lost their lives during Everest climbing. Overnight at Teahouse

Finally, the day has arrived. Today, we will touch the Everest Base Camp. Before reaching the base camp we will have to stop at Gorakshep for the lunch. The trail is on the moraine and glacier. Therefore, it is difficult to walk. Heed the instructions of the guide and follow the trail.

After trekking for about an hour we can reach the Everest Base Camp. We will collect the memories and again return back to Gorakshep. Overnight at Teahouse

Day 11: Early morning Hike to kala Pattar back to Guest House trek down to Pheriche

Early in the morning, we will commence our hike to the Kalapathar top (5545 m). We will witness the majestic sunrise. The view of Mt. Everest and surrounding mountains look spectacular from the top. Rejoice at the moment. We will then descend back to Pheriche via Gorakshep and Lobuche. Pheriche is at the foothill of Tabuche Mountain on the bank of the river. It is quite a tranquil place to spend the night. Overnight at Teahouse

We will retrace the trail back to Lukla via Manjo and Phakding. We will celebrate with our trekking crew members in the evening. It is the last day of our trek and we will do farewell to local porters and Sherpa.

Day 14: morning flight back to Kathmandu,

We will catch the morning flight back to Kathmandu. You can have free time in Kathmandu today.

Today is contingency day or also you can call it a Rest day. The guide will assist you in shopping and strolling around the Thamel. The agency will also host a cultural Nepalese-style dinner in a typical Nepali restaurant.

Day 16: Transfer to your destination

You will finally get to see your family and friends, let them know that you completed the Mount Everest Base Camp Trek and share your memories with them. The agency representative will bid you farewell at the airport. We look forward to seeing you soon...

What is the Best Time to do Everest Base Camp Trek?

Throughout the year, it is possible to do Everest Base Camp Trek. However, every season has its advantages and disadvantages. Find out yourself about the condition of the trail in each season.

December, January, and February are the months of the winter season in Nepal. The temperature decreases from -15°C to -18°C. Visibility is very low during this time of the year on the trail. Most of the time, the weather is foggy. Snowfall makes it worse to walk on the trail. However, there is less number of trekkers this season. If you love the less crowded trails, this season is the best time to trek EBC.

This is the best season along with the Autumn Season to do trekking on Everest Base Camp Trail. March, April, and May are the months of spring in Nepal. The weather condition is mild and clean. You can get the best visibility during this time of the year. Blooming rhododendron forests and new leaves on trees make the entire trekking splendid. However, there is more of a number of trekkers on the trail. As the season is the peak trekking time in Nepal.

June, July, and August are the months of monsoon/summer in Nepal. During this time of the year, the trail becomes muddy and slippery. It is due to the continuous rainfall. However, at the high altitude, it rains less. The biggest hurdle to doing Everest Base Camp Trek in Monsoon is the unpredictability of the Lukla flight. Visibility is very less due to fog, clouds and rainfall. Therefore, there is a high chance of flight cancellation.

The most beautiful and marvellous time to do trekking is during the months of the Autumn Season (September, October, and November).  The sky is clear and the weather/temperature is moderate. The vibes to travel Nepal this season are very different. The country celebrates its two major festivals, Dashain&Tihar. Therefore, it is the best time to trek from both natural and cultural perspectives. There are fewer hurdles during this season on the Everest trekking trail. However, expect a crowded trail.

Our travel planners and guides suggest that the spring and autumn seasons are the best times to do Everest Base Camp Trek. 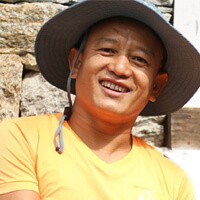